If you have ever seen the movie 27 Dresses then you will understand when I say I am seriously becoming Katherine Heigl’s character in that movie. In the last year I have been in over 3 weddings and I wouldn’t have it any other way. I absolutely adore my friends and love to take part in such a special occasion and since most of my friends have destination weddings or live in different cities I get great reasons to leave work to travel! When my friend Christy told me her wedding was going to be in New Orleans I was ecstatic! I was excited to go since I have never been but I was also most excited about trying the food!!! By the time I walked off my plane into New Orleans I had already started my food journey. I can actually say I ate my way through the city. Here is my list of must have food to try when you go to the Big Easy (oh and of course drinks too ).

As soon as my friend Emily and I arrived in New Orleans we knew we had to try this gem of a place! It is quite the tourist destination but it is also a must on my list of places to go! Café Du Monde is a French based cafe and is located in the French Quarter of New Orleans. It is known for their chicory style of coffee which adds an almost chocolate flavor to the café au lait drink and also known for their beignets. Emily and I both ordered an order of beignets (pretty much like a funnel cake but squared) and a café au lait. We realized after ordering we most likely could have just ordered one order of beignets since you get 3 in one order! It was quite delicious and the view of the street was amazing as well! It’s a great place to people watch and watch the horse and buggies go down the street. 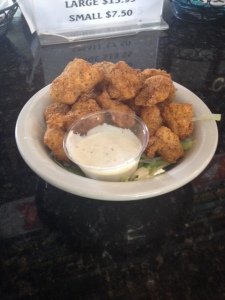 Literally right after just eating beignets, Emily and I ventured over to the French Market. I loved the French Market because it is a great taste of what New Orleans is all about. I started my way through the market by of course buying a gorgeous mask and a cute little voodoo doll for souvenirs. But as I was venturing I noticed the food stands and also noticed one place sold snake, alligator, and frog legs. I had to try one of those foods, so I played it safe and asked the woman working what was the best thing to try for someone who has never ate any of that before. She suggested gator bites so I went for it!  They were actually pretty good and tasted a bit like chicken! I would not say they are my most favorite food, but it felt good to tell people I ate gator!

I am one to taste just about everything but something about raw oysters creeps me out, so when the guy at the Tourist Info shop told Emily and I to try Acme Oyster House for dinner I was a little skeptical. New Orleans doesn’t just serve oysters raw on the half shell though but also chargrilled with garlic butter, so I decided to try that! It was pretty much heaven in my mouth! I finished my one order of them and decided to get another one as well. These are a def must try even for someone who isn’t sure how they feel about oysters! 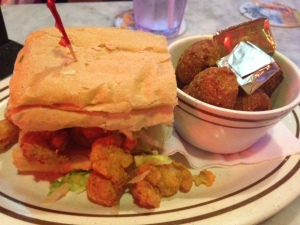 I first saw a Shrimp Po Boy watching the Food Network and thought “Wow, I really want to make or have one of those.” I never did get around to trying one so when I noticed they were popular in New Orleans I made sure to put them on my list of food to eat while there! The one above is actually from Acme Oyster House and came with hush puppies. I also ate this again 2 more times at different places so really you could try this anywhere in New Orleans and it would be delicious!

The Muffuletta is a popular sandwich in New Orleans that originated from Sicilian farmers. It consists of olive spread, mortadella, salami, mozzarella, ham, and provolone on a bread kind of like french bread. You can find this sandwich all over New Orleans but it originated at Central Market so I find this a great place to first try it!

Last but not least the drinks- Shark Attack, Hand Grenade and Hurricane

Tropical Isle- Tropical Isle is the bar to go to for the Shark Attack and Hand Grenade Drink. While waiting for our hotel room to be ready to check in, Emily and I ventured to Bourbon Street and decided to try these signature drinks. The Shark Attack is a drink to get if you want an experience. The bar tender first mixes up the drink and then will grab a shark toy. They then proceed to blow a whistle and ring a bell while screaming “shark attack!!!” as they drop the shark into your drink. Another drink to get there is the Hand Grenade. It comes served either frozen or on the rocks and is known for being very secretive on the recipe. One of these was enough for me though!

Pat O’Briens- Pat O’ Briens is known for their Hurricane drink. This is probably the most popular drink of New Orleans so it is a definite must try! It is delicious too as long as you like sweet drinks! It consists of rum, passion fruit syrup, and limejuice.

3 thoughts on “Eating My Way Through New Orleans: My Must Have Food and Drink List for the Big Easy”